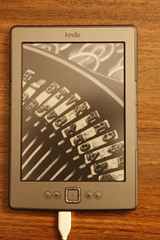 Today, my son (age 9) brought me approximately $100 cash (a couple of twenties, lots of 5’s and 1’s). “What’s this for?” I asked. “I want to buy Caitlyn (his 5 year old sister) a Kindle Fire, I’ve found one used on Amazon and I think that will cover it,” he confidently replied. He had been doing odd jobs for his grandparents and one of the families in our church. I wasn’t sure what his motivation was for sweating it out this summer, but I wasn’t going to argue – knowing it would build character as well as his piggy bank account. I don’t know any other word for the emotion I felt as he handed me the cash and stated his intent than, respect. Knowing he had been faithful to give to the Lord already, he would devote the remainder to his little sister. I respect that kid. He’s buying far more than a Kindle, he’s paying the price to communicate his love to his little sis.

I watched the three of them playing individually in the living room for the next couple of hours, randomly pausing the television to show each other a commercial, smiling, and laughing. I love it when my kids are getting along with Julie and me, but I love it more when they are playing happily with each other. We are called to be their parents, which means, at times, we have to temporarily forfeit friendship to do what is in their best interest. The three of them, however, have a unique bond that will hopefully last a lifetime.

My Most Popular Posts