When a Wise man Falls

08 Mar When a Wise man Falls 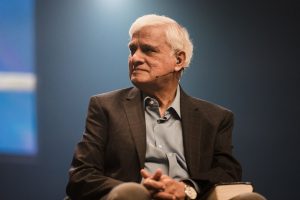 community has been struck with the horrible news concerning the sinful actions of Ravi Zacharias. We who followed Zacharias’s ministry over the years had a dilemma on our hands. What do we do with all of the things he had taught us? Was it flawed information? Did we misinterpret his giftedness?

For several days after the news broke I was dumbstruck that such things occurred in a man who gave no public hint that such gross improprieties were in his life. His actions were not only inappropriate, they were criminally wicked.

Others have fallen that caught us less by surprise – the communicator who pushes the limits with crude jokes or inappropriate language, the minster who gives extended time to frequent counseling sessions with a person of the opposite gender. Paul said it this way in his letter to Timothy, “The sins of some people are conspicuous, going before them to judgment, but the sins of others appear later.” (1 Timothy 5:24) With Zacharias they appeared later, even after his death, at least for those of us who did not know him personally.

As I thought through the effect of Zacharias’s sin on his life’s work I remember one far wiser and far more sinful than Ravi. King Solomon was renown for his great insight. He received it as a gift from God upon his coronation as the King of Israel.

7 And now, O Lord my God, you have made your servant king in place of David my father…9 Give your servant therefore an understanding mind to govern your people, that I may discern between good and evil, for who is able to govern this your great people?” 10 It pleased the Lord that Solomon had asked this. 11 And God said to him, “Because you have asked this, and have not asked for yourself long life or riches or the life of your enemies, but have asked for yourself understanding to discern what is right, 12 behold, I now do according to your word. Behold, I give you a wise and discerning mind, so that none like you has been before you and none like you shall arise after you. 13 I give you also what you have not asked, both riches and honor, so that no other king shall compare with you, all your days.

From this deep well of wisdom God used Solomon to pen “The Song of Solomon” in his early years. There he reveals the mysterious wisdom that applies to the relationship between a man and his wife. His love for his bride, the Shulamite (the feminine version of the name Solomon) seems unbounded. His commitment to her unmatched. The passion of his commitment to her can be seen in Song of Solomon 8:7 (ESV) Many waters cannot quench love, neither can floods drown it. If a man offered for love all the wealth of his house, he would be utterly despised.

Then later in life he compiled various thoughts on wisdom in the book of Proverbs. Even there he warned his sons against the dangers of sexual sin – with perfect words he describes the pitiful fate of man who follows and adulterous woman – Proverbs 7:22–23 (ESV) 22 All at once he follows her, as an ox goes to the slaughter, or as a stag is caught fast 23 till an arrow pierces its liver; as a bird rushes into a snare; he does not know that it will cost him his life. 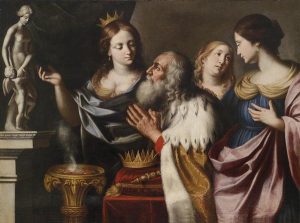 Yet, we also read that at some point Solomon’s commitment to the Shulamite drifted. We are told in 1 Kings 11:1–3 (ESV) 1 Now King Solomon loved many foreign women, along with the daughter of Pharaoh: Moabite, Ammonite, Edomite, Sidonian, and Hittite women, 2 from the nations concerning which the Lord had said to the people of Israel, “You shall not enter into marriage with them, neither shall they with you, for surely they will turn away your heart after their gods.” Solomon clung to these in love. 3 He had 700 wives, who were princesses, and 300 concubines. And his wives turned away his heart.

What was happening in the heart and mind of Solomon as he perpetually, blatantly, and repeatedly disobeyed the heart of God concerning marriage? We gain some insight in the final inspired work of Solomon’s life. Ecclesiastes was likely written when Solomon was a relatively old man. There he seems to be utterly miserable, having tried and tasted everything that “life under the sun” has to offer and coming up depressed and empty.

16 I said in my heart, “I have acquired great wisdom, surpassing all who were over Jerusalem before me, and my heart has had great experience of wisdom and knowledge.” 17 And I applied my heart to know wisdom and to know madness and folly. I perceived that this also is but a striving after wind.

So Solomon seems to have decided to engage in a grand experiment where he would test the limits of sin to see what effect it had on a man. In Ecclesiastes 2:1–3 (ESV) he tells us,  1 I said in my heart, “Come now, I will test you with pleasure; enjoy yourself.” But behold, this also was vanity. 2 I said of laughter, “It is mad,” and of pleasure, “What use is it?” 3 I searched with my heart how to cheer my body with wine—my heart still guiding me with wisdom—and how to lay hold on folly, till I might see what was good for the children of man to do under heaven during the few days of their life.

He speaks of his sexual exploits in Ecclesiastes 2:8–9 (ESV) 8 … I got singers, both men and women, and many concubines, the delight of the sons of man. 9 So I became great and surpassed all who were before me in Jerusalem. Also my wisdom remained with me.

As he sinned with woman after woman, he never lost the Divine perspective. What a torment this must have been for his soul. It would seem better to go insane, lose any recollection of God’s word in your life. It seems this is why men get drunk when they sin, they wish to lose the memory of God for a moment. But Solomon could not drown his wisdom – he alway saw God’s perspective, even as he sinned.

He goes to his grave with a life that to him seemed utterly meaningless. He could find no pleasure in his kids or grandkids. The simple things like a nice meal, a cold glass of lemonade on a hot day, no longer brought any joy to the King.

What effect did the decisions of Solomon have on the writings he penned under the inspiration of the Holy Spirit? Directly, nothing – it is God’s prerogative to write straight truth with crooked pens. As a matter of fact, sinful, broken people is all He had to work with among the descendants of Adam.

Thus, the from time to time, men like me have to answer difficult questions around the works of Solomon, yet those works persist, for they are Divinely inspired.

I don’t expect the works of Ravi Zecharias will fair as well. His work, good as it was, was not holy scripture. Only time will tell if the works will remain and be blessed in any degree. If they are it is because God blesses truth even when spoke by untruthful men. It is highly unlikely that he will have the lasting impact of a C.S. Lewis or a Jonathan Edwards.

In the sad but true words of Solomon, “He who commits adultery lacks sense; he who does it destroys himself. He will get wounds and dishonor, and his disgrace will not be wiped away.”

Yet, so as not to leave us hopeless, as we are at times under the influence of broken men, our Lord reminds us in Matthew 12:42 (ESV) 42 … behold, something greater than Solomon is here.

Scripture, and history, is not a story of good guys and bad guys – it is a story of bad guys and Jesus, the only ultimately good man who ever lived. Jesus gives hope to the Solomon’s, the Zacharias’s of the world and to those of us who have studied under them through the years.

Scripture, and history, is not a story of good guys and bad guys - it is a story of bad guys and Jesus, the only ultimately good man who ever lived.